Migrating birds face significant challenges because of light polluted areas. Birds are distracted by the bright lights and confuse cities with the sun. They fly closer to the cities and die when they crash into buildings or fly around in circles and collapse from exhaustion.

This problem isn't limited to birds. Land-based animals face similar problems. Roads and highways present dangerous obstacles that they can't just fly over. They're not going to stop migrating. They need to get across. Tragically, many animals die after being hit by cars or trucks while trying to cross roads.

Humankind has made efforts to address these issues by incorporating Wildlife Crossings into the design of critical roads and highways. These provide safe passageways from one side of a road to another.

The below example shows an underpass that allows wildlife to move from one side of a highway to another. 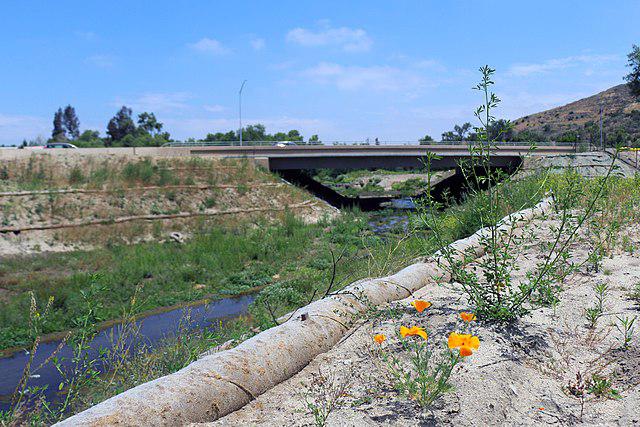 Here's another example of Deer using a similar underpass: 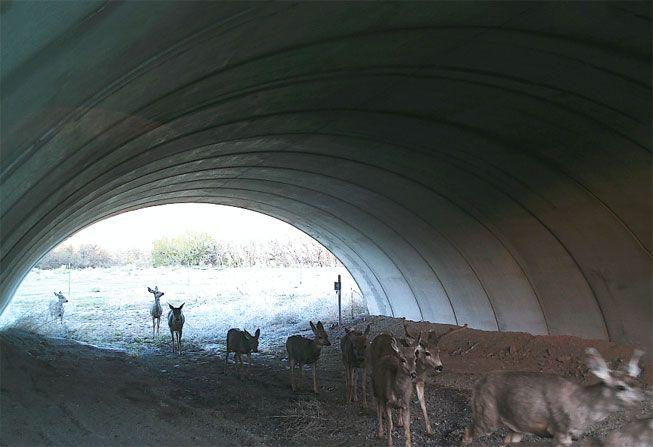 There are also overpasses. These allow animals to pass over highways. 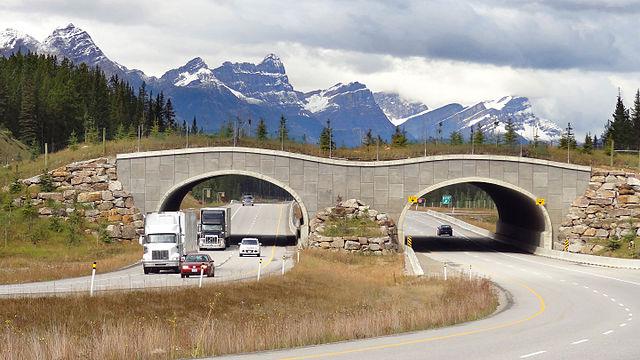 None of those Wildlife Crossings address the needs of birds. They can already fly over highways, so overpasses and underpasses are irrelevant, and neither address the light pollution challenges faced by birds.

One can ask why there are no similar mechanisms for us to use to alleviate bird's migration challenges. Is there anything we can do to help birds navigate around dangerous areas and avoid or reduce the influence of light pollution on their migration patterns?

Given what we know about how birds migrate, I believe we can leverage a bird's sense of direction towards magnetic north to strategically alter their flight paths. To understand how it could work, first we need to know more about how magnetic fields are created.

We know from high school Physics class that we can create a magnet using electricity. A wire repeatedly wrapped around a metal core will create what is called an electromagnet when current is passed through the wire.

I can and did experiment with this using the compass I used for Orienteering. The magnetic field I created was fairly weak, however, and could not influence the compass unless it was right next to the compass. Of course there are stronger magnets available. I experimented with one and could influence the magnet from a few centimeters away.

The math behind calculating or estimating the strength of an electromagnet can be extremely complex. The simplest equation that expresses the relevant concepts is below.

The variables in that equation are:

The important point is that the strength of the electromagnet will go up when the number of wire turns goes up or the current increases. The strength will go down when the length of the coil increases. And there is this other thing called Permeability. What's that?

One can create an electromagnet using a coiled wire that surrounds nothing but air. That would work, but the magnetic field strength would be very weak unless the current was very large. The field strength would be a thousand times larger if it were to surround something like an iron nail. There are also special materials that could be used, such as Metglas. Metglas is a metallic glass alloy that is the key component of MRI machines. It is a thousand times more powerful than iron and has the same weight. Materials such as these are used to generate powerful magnets. 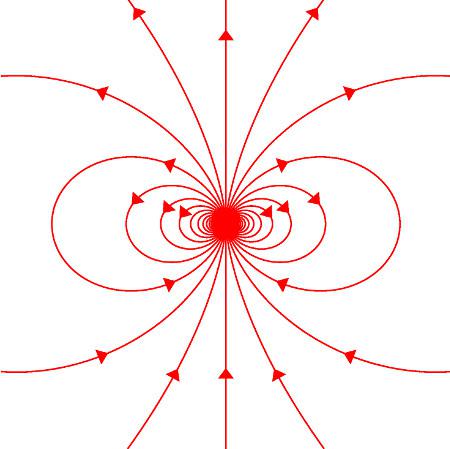 Creating a Wildlife Crossing for Birds

As previously discussed, migrating birds will fly in a particular direction with respect to magnetic north. They can get distracted by light polluted cities and fail to fly along their intended path. 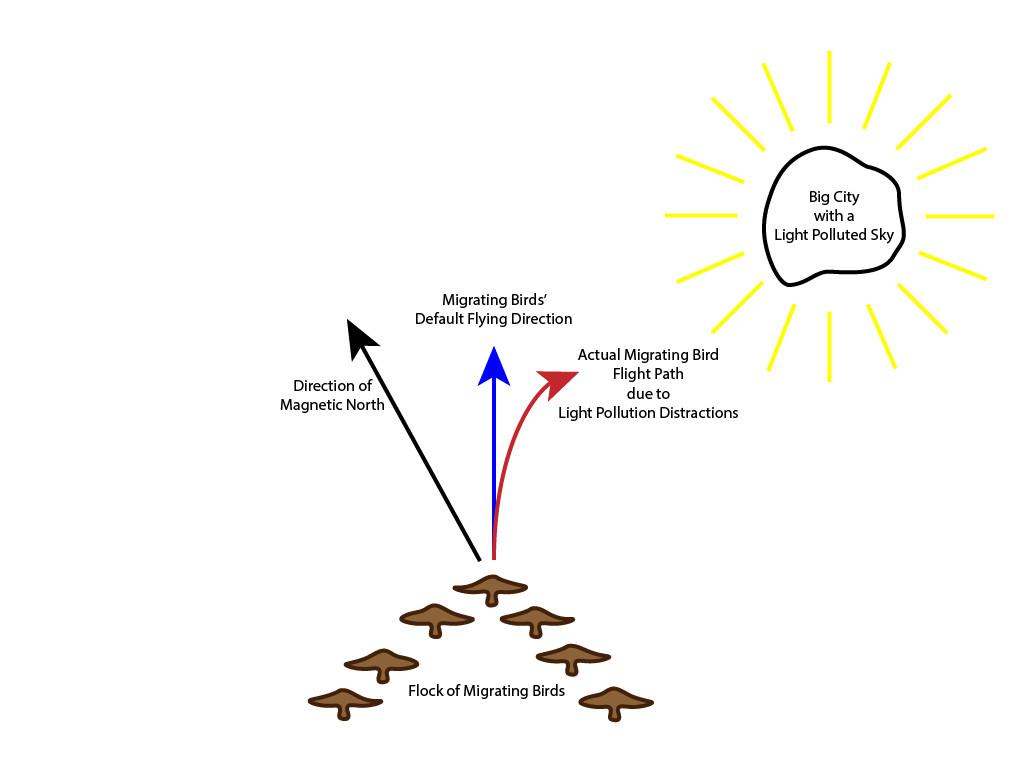 Illustration shows a top-down view of migrating birds and their flight path.

One approach to create a wildlife crossing for Birds is to build strategically placed land-based stations that generate large magnetic fields to guide birds away from light polluted cities. If a land based magnet could affect a bird's perception of the earth's magnetic field they might fly in a slightly different direction.

This idea is not feasible, however, given how the strength of a magnet diminishes over distances. The magnitude of the Earth's magnetic field is in the range of 25 to 65 microteslas. To compete with the earth's magnetic field the necessary strength of a magnet even a kilometer away would be extraordinarily dangerous for any object closer to it. This approach will not work.

It is necessary to bring the magnets closer to the birds. It happens that birds already can and do fly with electronic attachments. Pictured below is a geolocator on a Bobolink. These weigh a fraction of a gram and can record a bird's position data for several years. 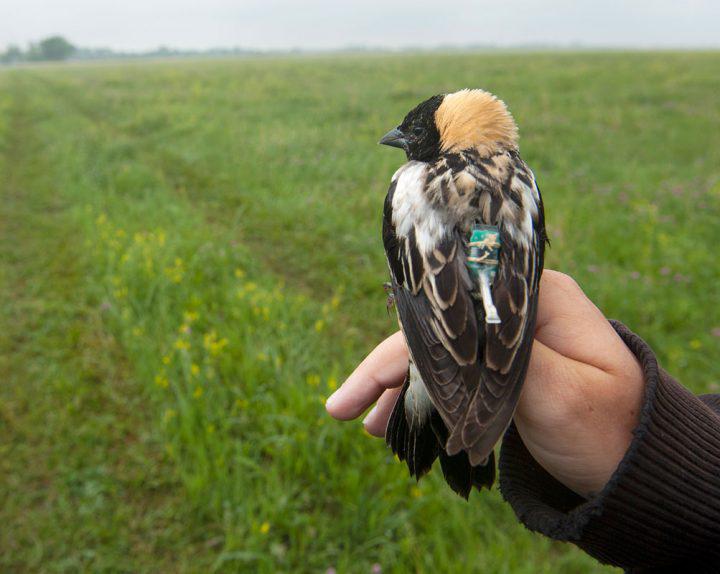 Birds can carry at most 3 to 4 percent of their body weight, typically only a few grams.

One could create a small electronic package that is attached to the back or head of a bird that can generate a small magnetic field, altering its perception of the Earth's magnetic field. Since small devices can already do geolocation, they can be programmed to identify their proximity to known light polluted areas and respond by activating a small electromagnet.

This idea could work because the magnets could be much smaller and would require much less electricity. There is still a problem of generating a magnetic field that is strong enough without depleting a battery's limited quantity of electricity. Most likely this would require advanced materials for the electromagnet, like Metglas, but given the cost of such materials that might make this infeasible.

One problem with this idea is that it is not known how exactly birds detect the Earth's magnetic field. There is no "magnetic field organ" found when dissecting a bird. So where and how should the magnet be positioned? Nevertheless, this does suggest a potential experiment to find out, where a scientist attaches small magnets to a bird and observes changes in behavior. Since magnetic field strength is predictable one can calculate which portions of the bird's body are influenced by an attached magnet.

Another problem with this is the expense. It already costs a few thousand dollars to make a single geo-locator. Mass producing similar geo-guidance systems would be at least as expensive. These devices would also have to be recovered after birds die.

Given these difficulties it would make more sense to use aerial drones. Light polluted cities could each have a small fleet of drones positioned in the surrounding countryside that would be deployed when ground-based radar detects an approaching flock of migrating birds. We already have drones that can fly for hundreds of miles and stay aloft for hours. Instead of using these for military purposes, they can be equipped with technology to emit light or magnetic fields. They can fly near a flock of migrating birds and guide them around dangerous areas. 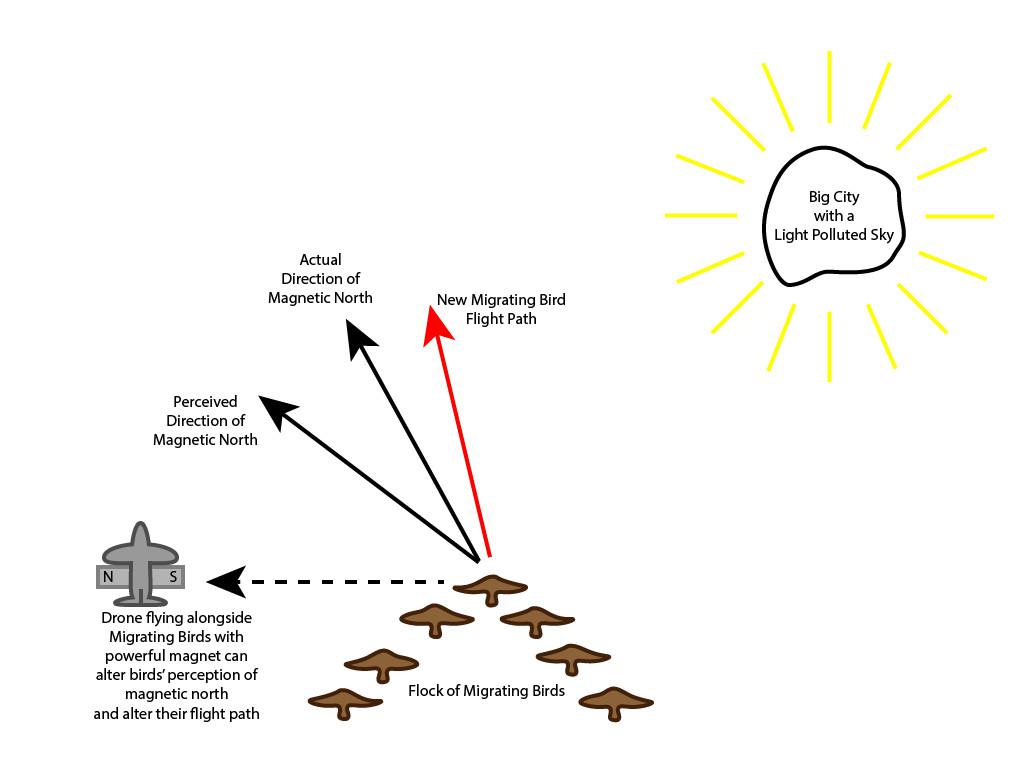 A drone flying alongside migrating birds can use a powerful magnet to alter their perception of magnetic north and guide them away from the light polluted city.

Using aerial devices to assist migrating birds has been employed before. In the past there was a program called Operation Migration that literally taught Whooping Cranes how to migrate. The birds had been raised in captivity and did not have parental birds to teach them their migration routes. These researchers were able to do this using an airplane. This project will do something similar except drones will be used to assist birds along their migratory routes.