Birds migrate north and south twice a year, traveling long distances from one part of the Earth to another. They evolutionary purpose of migration is to adjust the distribution of birds to match available food supplies and breeding locations. Remarkably, birds are able to migrate to and from the same locations year after year. How can a small animal with limited cognitive abilities perform such a feat?

How birds migrate is an area of scientific research and is not fully understood. Many research papers have investigated this and have identified multiple relevant factors. It is believed they use some combination of landmarks, the sun, the moon and the stars, and the Earth's magnetic field. It can be shown that birds do in fact orient themselves using the Earth's magnetic field. Research has shown that a bird in a cage immersed in a magnetic field will orient itself to the direction of that field. It is unknown how they do this.

In any case, it is obvious birds navigate very differently from how humans navigate. These days we mostly use maps on our phones. It wasn't always like this, however. In the past humans also used landmarks, the sun, the night sky, and the Earth's magnetic field.

To learn more about navigation using landmarks and the Earth's magnetic field I bought a compass and learned about navigation and orienteering. Orienteering is a sport that is practiced all over the world. Far from being a archaic device, a compass can be a remarkably useful tool. Much like a slide rule or an abacus, a compass is a device that has knowledge embedded into its design. 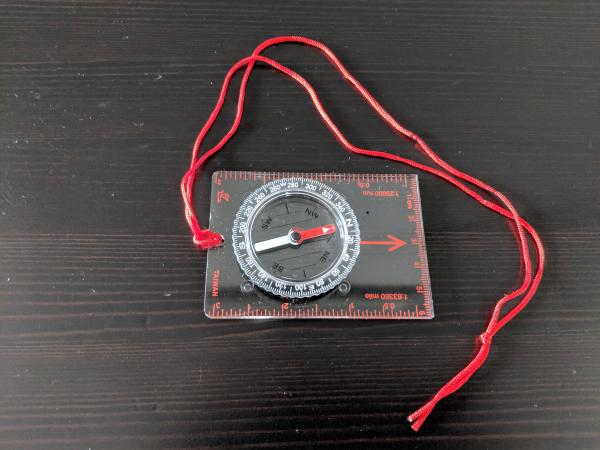 My goal for this exploration is to learn how to actually use a compass and map to navigate. This serves many purposes. Among other things, by gaining a deeper understanding of navigation terminology I will better understand scientific research papers that study the navigation of birds. I chose to go to an area where I frequently get disoriented or lost, Central Park, with a map and compass, and with only those tools navigated around the park.

The declination for New York City is 12.90° W ± 0.36°. One can obtain declination values from NOAA using one of their calculators:

Next you need a proper map. Google Maps by themselves are not sufficient because don't provide information on the direction of magnetic north. It happens there are special orienteering maps designed for this purpose:

I found this map on an International Orienteering website. Observe the angled lines showing the direction of magnetic north. One can use these maps with a compass to get bearings.

After looking at an official orienteering map I realized I could make my own map using Open Street Map data. Starting with a screen shot of the lower section of Central Park: 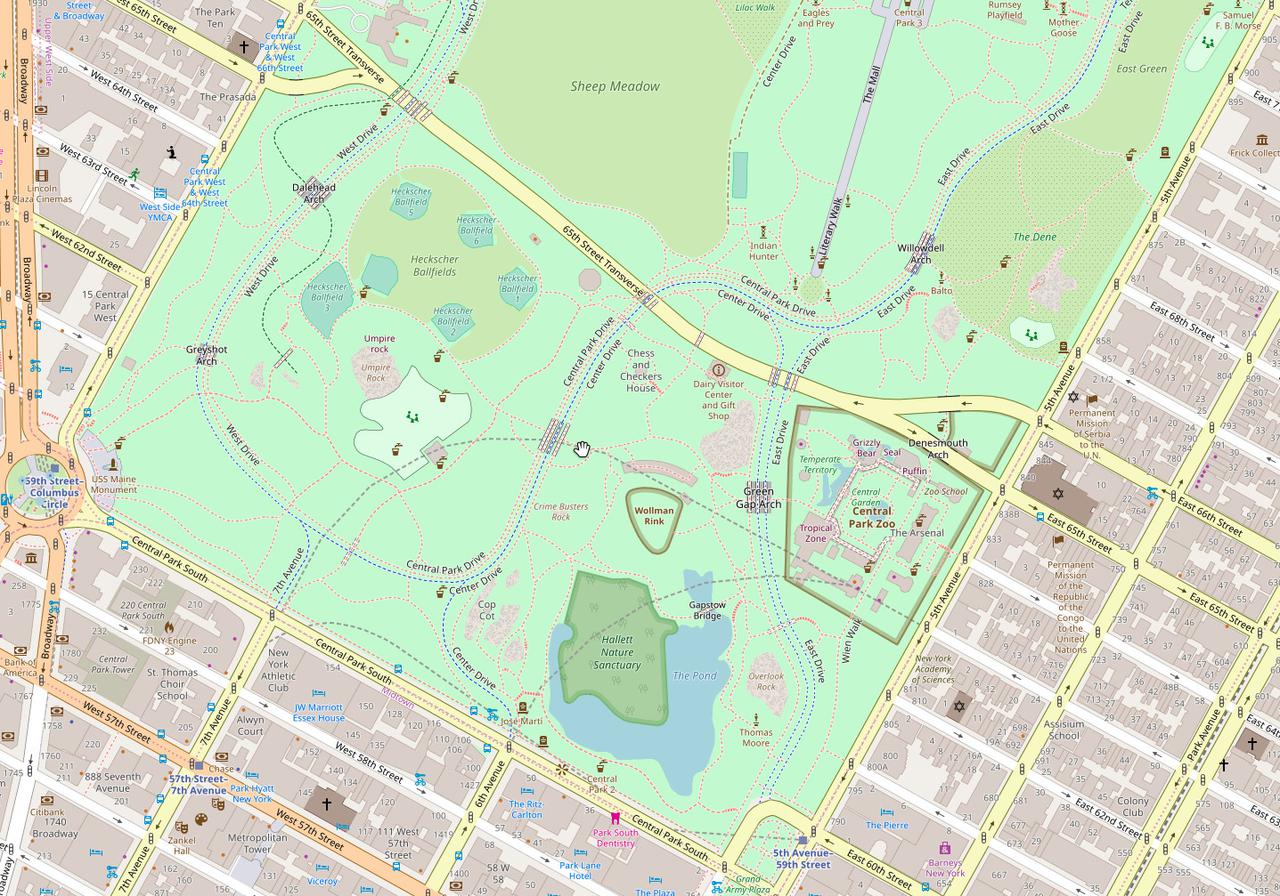 I can add parallel grid lines in Photoshop in a separate layer: 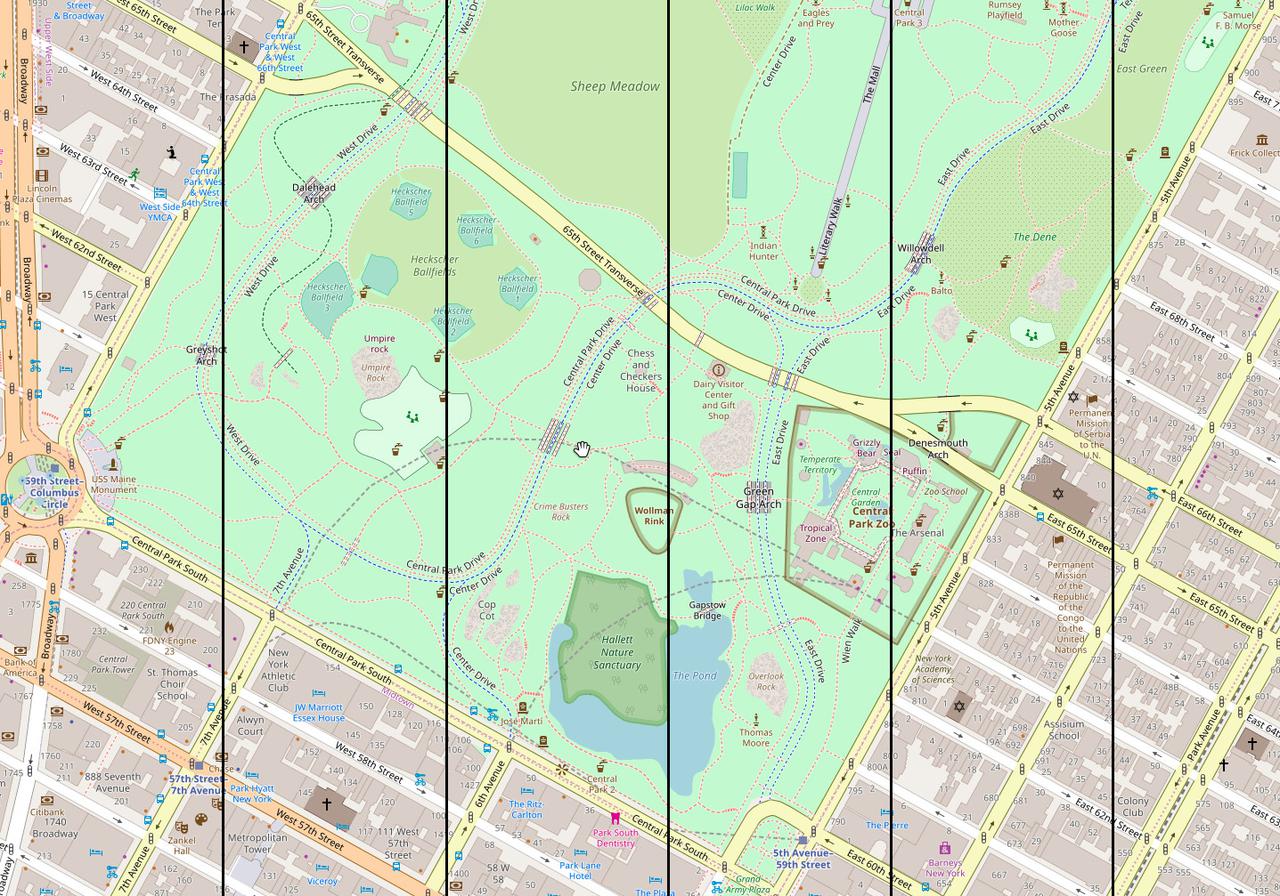 That layer can be rotated to the left 12.90°. Then with a little bit of editing I can produce the final version: 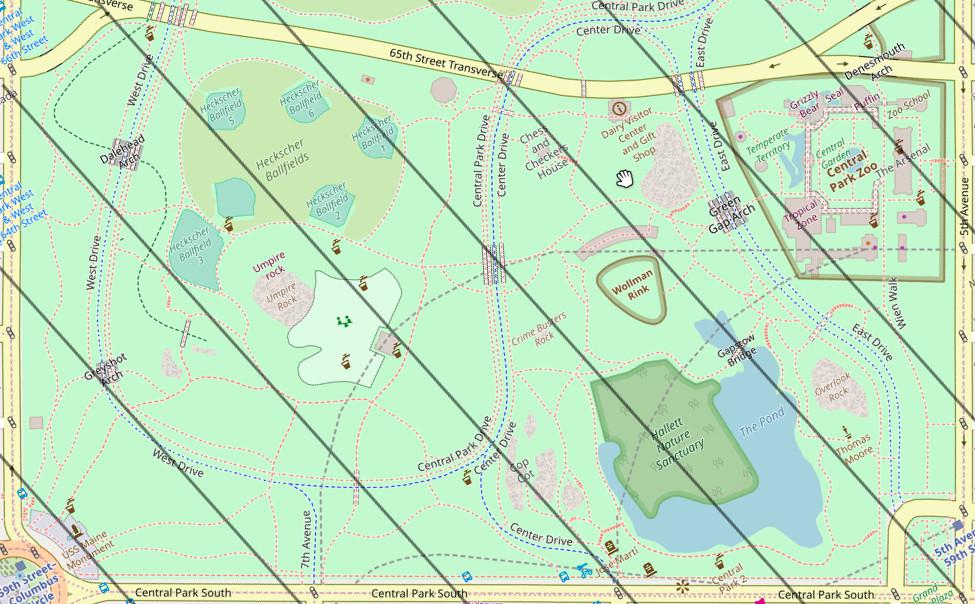 I can place a compass on this map lined up with the grid lines and measure angles that will match the angles I get when I look around me while in Central Park.

Starting from the Grand Army Plaza area of Central Park I used only my compass and map to navigate around.

First I used the compass to walk to locations I could see while maintaining the same bearing. I did this to travel between locations 1, 2, 3, and 4 on the map. I used the compass to measure what bearing I should be heading in to reach each location and then monitored it to make sure I continued to follow that direction as I walked. 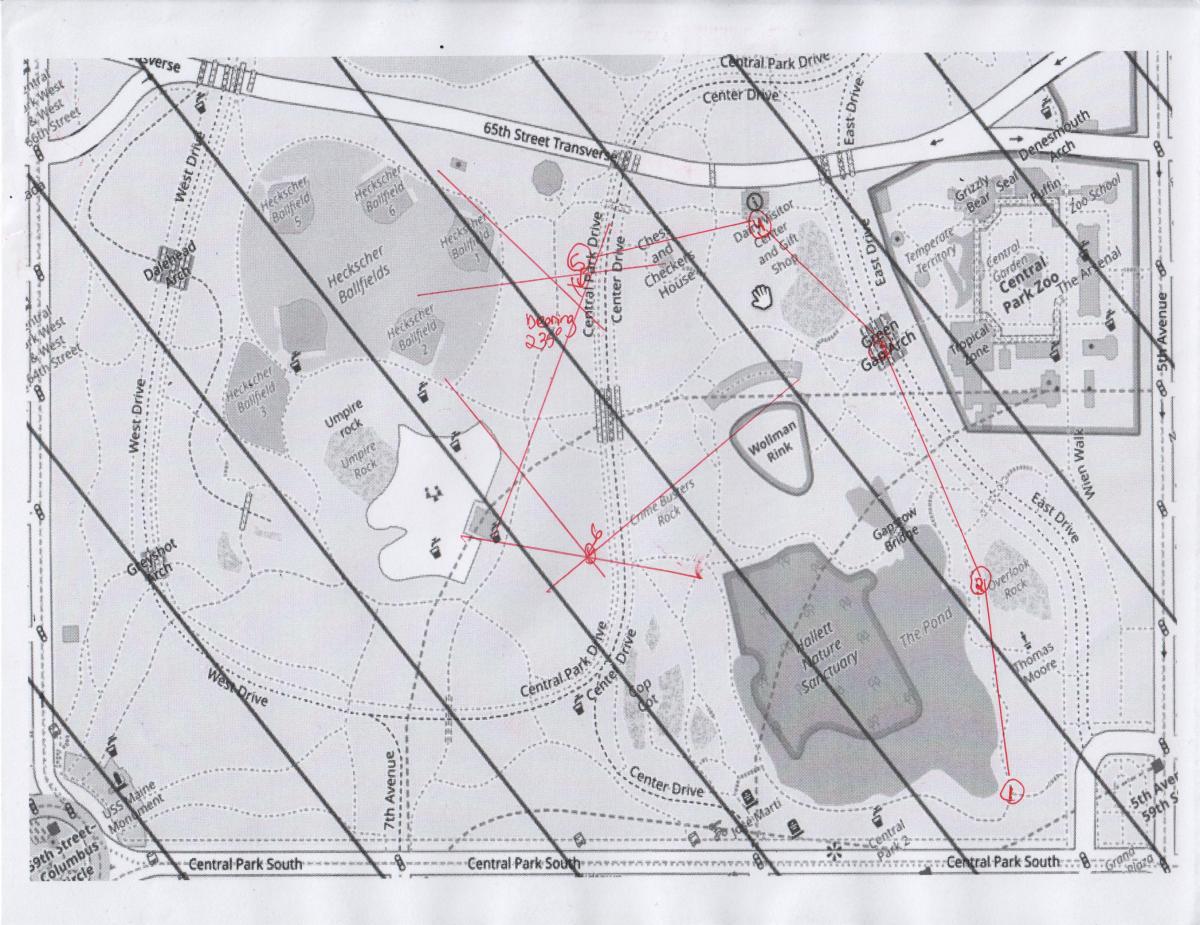 Next I walked to a nearby location and tried to use the compass to identify my exact location on the map. To do this I measure the bearings of landmarks I can see and also pinpoint on the map. Each angle is drawn with a straight line on the map. Two lines will intersect and identify my position. Three lines should also identify the same exact position, but to the extent that they don't, they show me the error in my measurements. For position 5 in the map I was somewhere inside the red triangle.

From there I used the map to determine I needed to walk at a bearing of 235 degrees (relative to true north) to get to the bathroom, something I frequently cannot find when I am in this park. I followed the guidance of the compass and got me to my selected destination.

From there I walked to another unknown location and again tried to triangulate my position. This time I did a better job, as the three lines intersected perfectly, locating myself at position 6. Using farther landmarks helps improve the accuracy of this procedure.

Orienteering is about measuring and transferring angles to and from the real world and a map. The complicated thing is keeping in mind what each angle is relative to and making the proper adjustments when moving angles from one to another. The design of the compass makes this easier and somewhat idiot proof.

In any case I thought this would be a lot easier. Orienteering involves multiple angle adjustments and it can quickly become confusing where I should add or subtract. Online documentation and instructable videos can be confusing because they don't all use the same compass techniques. The map I used is definitely a beginner map because it has magnetic north grid lines. This eliminated one of the adjustments I needed to make. I also found myself frequently rotating around to make the orientation of the map match the correct orientation with respect to magnetic north. This made navigating a lot easier.